Ethan Nielson was hit by a truck in 2016.  Although he survived, Ethan and his family endured a long struggle to recovery with the help of the Alberta Children’s Hospital.

Ethan’s mother hosted a charity fundraiser on March 17, 2017, marking the one year anniversary of the collision.  I was quite touched by the story, and brought my tea 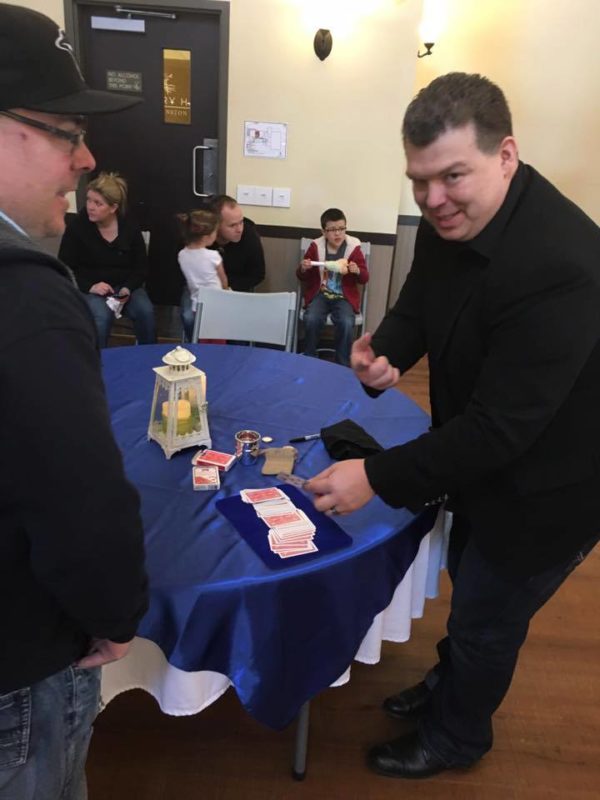 m out to help in the 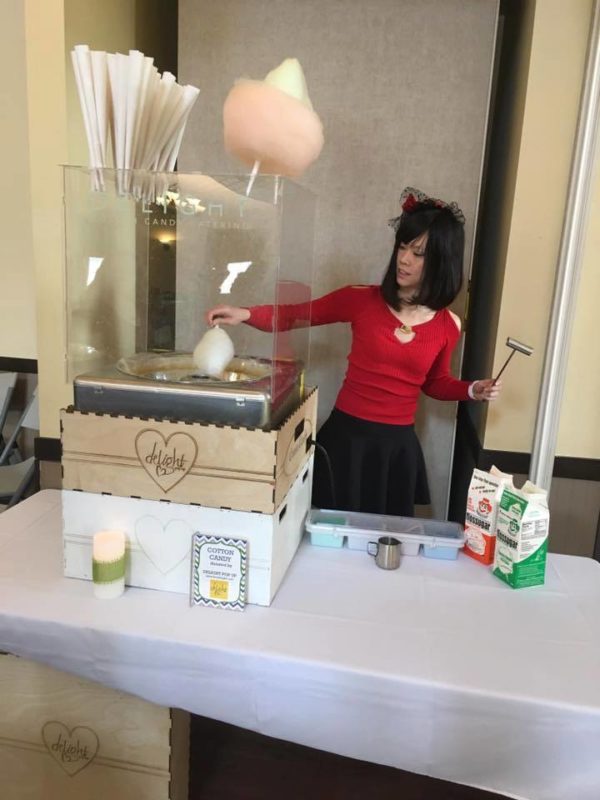 fundraiser with a full stage magic children’s show, cotton candy for the guests by Delight Pop Up, and post-show close up one-on-one

It was great to finally meet Ethan, and really happy to hear his recovery is progressing very well.

“…  Engaging stories that spurred audience participation including levitating a young guest.  Yeats kept everyone on their toes with a riveting show.  We will for sure use him in the future.” – Melanie Nielsen 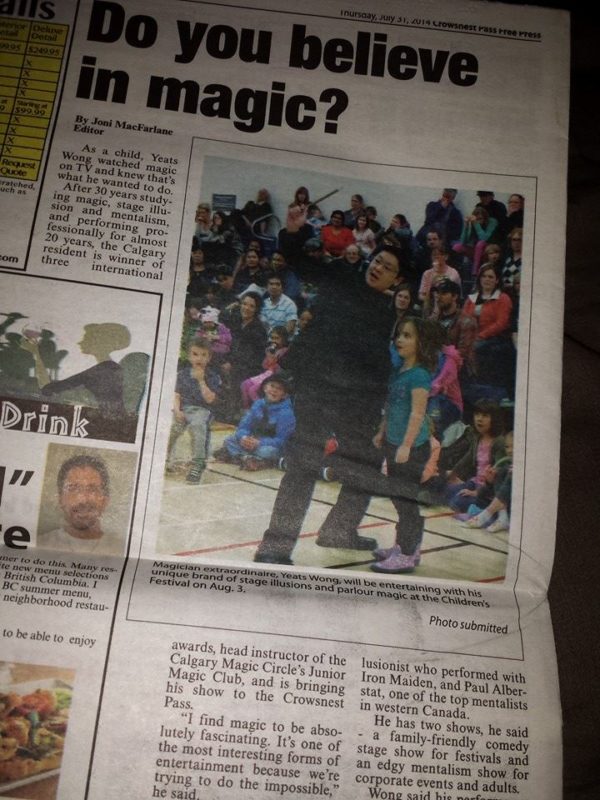 For the second year in a row, Yeats Magic Co was invited to perform at the Crowsnest Pass Rum Runners Days!

This wonderful picturesque community is located in the fresh mountain air of the Canadian Rockies, and every year they have a family festival, featuring music, magic, games, and plenty of food. It was great to be invited back as the headline magic illusion entertainment, and perform some of our big stage illusions.  As usual,  Elle (my lovely assistant) stole much of the attention as she climbed in the big boxes and disappeared and reappeared.

In addition, we brought along two of my young students as helpers.  During the stage show, they set up a booth and made balloon animals for all the kids.

Aside from having a great time performing, I also had a lovely treat as they put me up at this incredible B&B.  Hot tub, pond, and my own waterfall to gaze at! I had an absolute blast attending anc competing at this year’s regional magician’s conference, hosted by Calgary’s finest magic shop, The Vanishing Rabbit (my favourite store in the entire world!). A huge amount of work went into this event by magic shop owner Brent Smith and his wife Anna, along with the hardworking crew (including local magicians Justin Mantelli, Kent Wong, TD Sparks, Gwyn Auger, Chris Lovely, and Manuel Ramirez, to name a few!).

The June 2015 Mega Magic Saturday conference lived up to its name – jam packed with auctions, competitions, shows, and professional lectures by veteran pros from Ontario, Chris Westfall, and Anthony Lindan. It was an amazing and professionally run event, and well attended by students, amateurs, and veteran professionals from all over Alberta.

I absolutely love competitions. It’s an incredible opportunity to see our most talented performers show off their best material, and evolve their craft to new levels. Performing for a lay audience can be fulfilling in itself, but expert judges have seen all the acts, and can give feedback on new and innovative magic acts. But in addition, judges are able to score performers on presentation, costuming, creativity, and technical skill.

I was very happy to have walked away with the 1st prize at the competition, but even more happy to have had the chance to see the best that Alberta has to offer, and participate in the camaraderie of my fellow performers.

A great event by The Vanishing Rabbit Magic Shop! 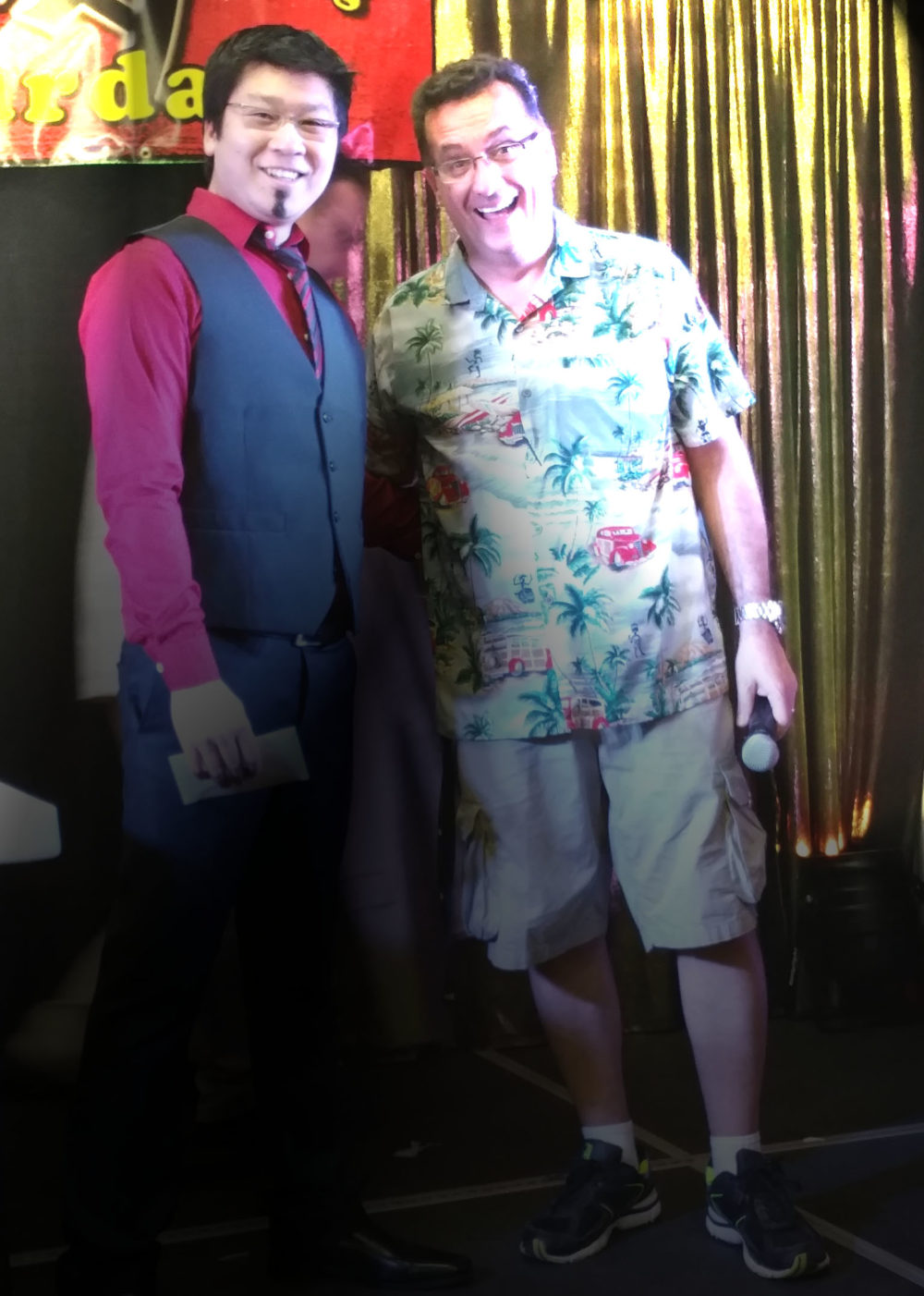 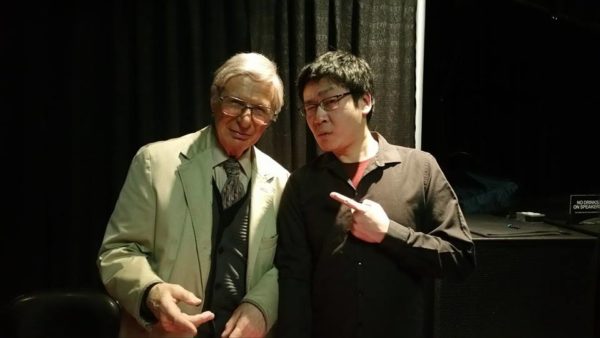 The Amazing Kreskin is one of the early influences to my work as a performer and mentalist… and he truly is amazing!

From 1970 – 1975, The Amazing World of Kreskin was a Canadian TV show, produced in Ontario, and syndicated across the U.S.  He’s appeared on The Tonight Show, Late Night with David Letterman, and Late Night with Jimmy Fallon.

Unlike magic illusion, which uses visual effects and sleight of hand to accomplish an effect, mentalism creates an illusion through the use of psychology, science, and an understanding of the human mind.

Kreskin has never claimed to be psychic – he is first and foremost and entertainer.  Watching him perform, its incredible to see the amount of pure presentation and charisma he puts into every performance.

I have huge respect for Kreskin, as one of the most successful entertainers in mentalism, and the creator of his own unique brand of entertainment. 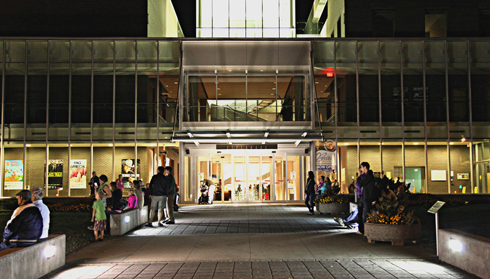 Had a great time on the weekend performing at the beautiful Esplanade Arts & Heritage Centre in Medicine Hat, Alberta!  It was a gorgeous facility, and a great audience! 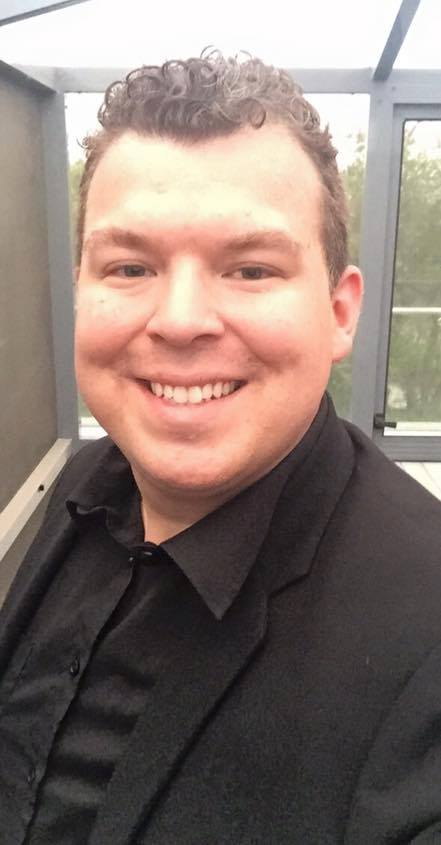 For this gig, I brought in Okotoks’ up-and-coming close up magician, Chris Hogan.  Chris has been studying and performing close up magic in casual settings for many years now, but only recently began performing professionally.  I had a chance to watch him in action; not just executing technical sleight of hand, but interacting with the audience!

Chris provided the close up portion of the cocktail hour while I focused on setting up for the stage show.  In addition to giving me a chance to provide Chris with some on the job coaching and mentoring, I do admit I appreciated the company on the 6 hours of driving!

The main stage show was held on the rooftop facility, with a splendid evening view of the city and fresh night air.  Unfortunately, immediately after my opening act, thunder and lighting lit up the night sky.  I made a few quips about my special effects team, and then halted the show as the wind and rain toppled my prop setups.

In my decades of performing, I always know to have a contingency plan for bad weather.  But usually the bad weather hits before the show starts, or at least there is indication of poor weather throughout the day.  In this case, we had to change our plans very rapidly, and move to our Site B, mid-show.

It did take about an hour to move the audience, bar, staff, and equipment to our indoor location, but everyone took it all in stride.  Despite the hiccups, I got a nice note the next day:

“Thanks again for coming down and giving us a great show.  I had lots of positive feedback and people were very impressed with you both.  I got texts the next day with ‘Really impressed by the magician and illusionist.’  ‘They blew my mind.’  Thanks to you both for making this a fun night and glad the rain didn’t really hamper things.
So glad I decided to go with your unique parlour show. – Tyson”

A pleasant drive, beautiful venue, and a great audience… that’s what makes it so fulfilling to be a performer! 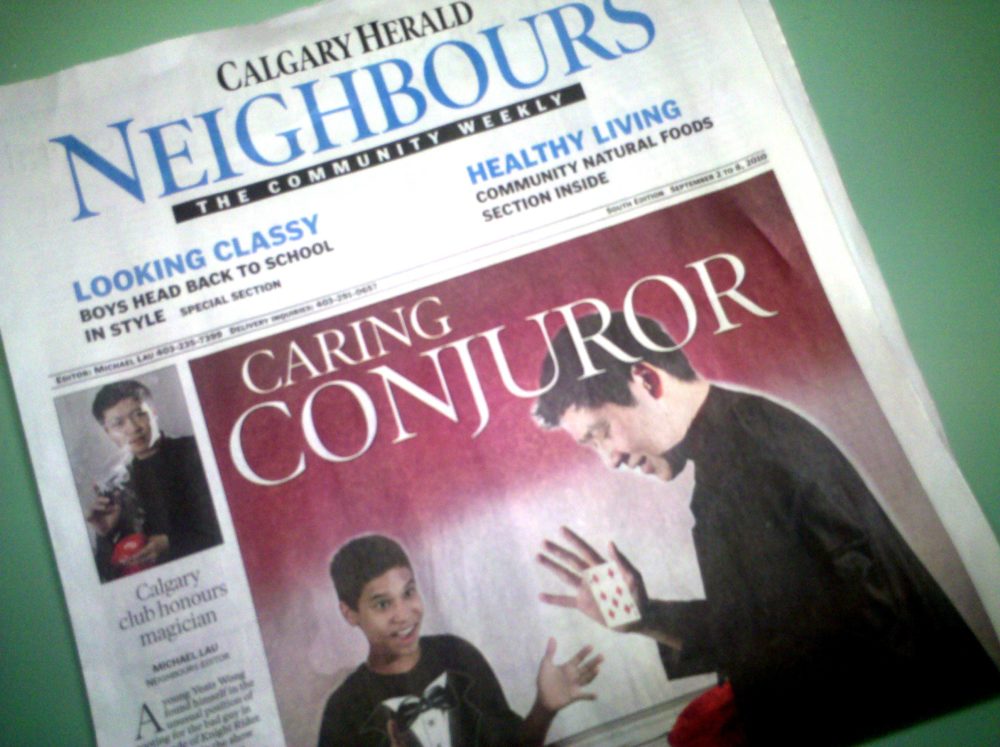 Thanks to Neighbours writer, Michael Lau for putting together this very cool article in the Calgary Herald.  Josh Govender was great for patiently sitting around for an hour for the Herald’s photoshoot! 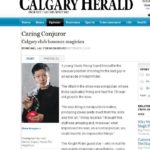 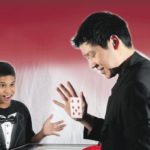 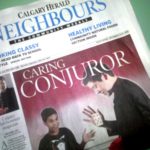 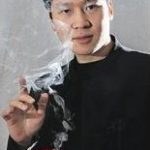 *Sniff* anyone else smell something burning?? 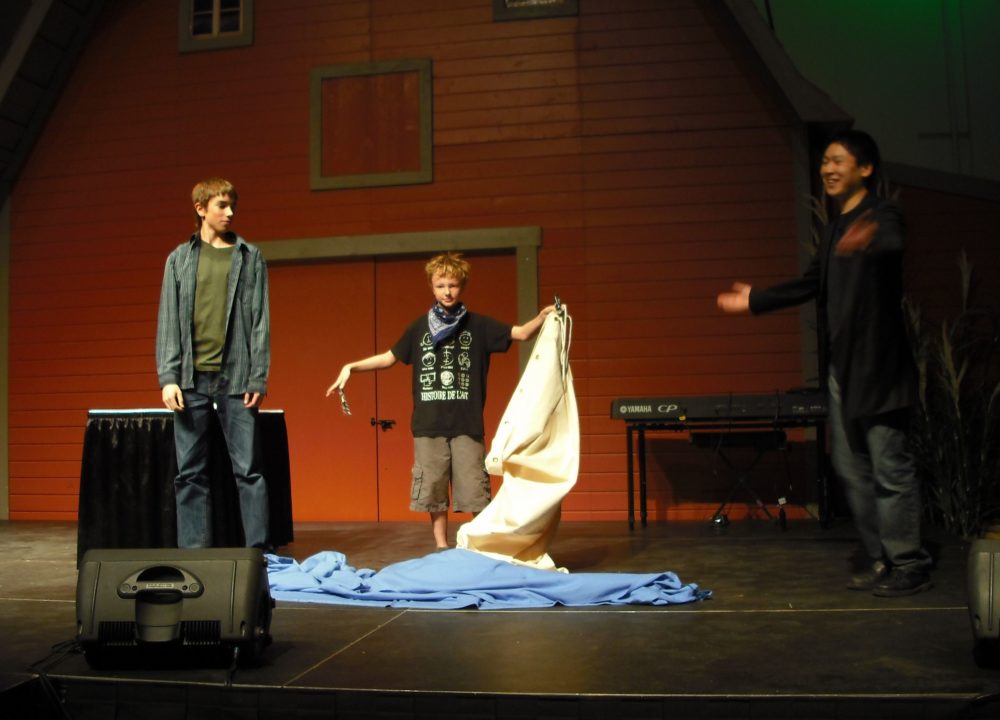 An afternoon of fun and magic at the Window on the West stage at the Calgary Stampede; every seat was taken, and the standing audience was three layers deep! 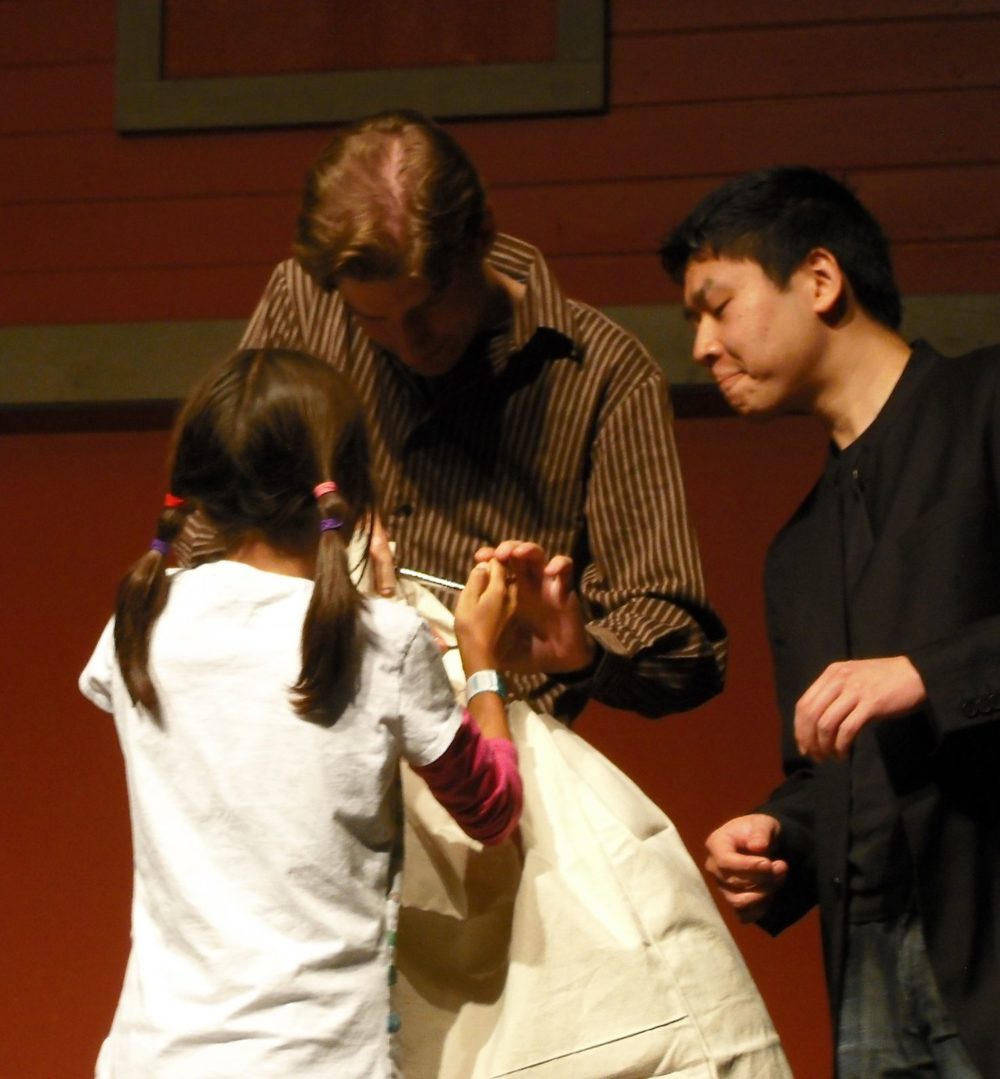 Ryan Pilling (Left… the one without the pigtails) assists.

Myself, as well as Malcolm Russell interview with Shaw TV, plugging the upcoming Muscular Dystrophy Canada fundraiser show.
Yeats challenges Suzanne of City TV Breakfast Show to a race! Who will escape first? Notice how Suzanne is a little too distracted to note Yeats’ multiple escapes 🙂
Facebook
Envelope